How to create a GTK application using Python – Part 1

Hello everyone, this new article is a start of a new era on my blog as I will start writing few articles to share some tips or like on this one, a series of articles to build something together from scratch.

Writing a GUI(graphical user interface) application using Python isn't something new as you can already use a long list of libraries that allow you doing that. The difference from what are we going to do here is that we are going to use a list of GNOME libraries like GTK. Once the application is usable, we are going to add Meson as a build system and ship it on Flathub as a Flatpak. We will also talk a bit about application integration by following Freedesktop standards like shipping a metainfo file that describes the application, a desktop file, beautiful icons that follows GNOME design guidelines.

The most simple use case is a simple Todo list that should allow us to add new tasks to a list, remove them, mark them as done/undone, search on the tasks list, we will be adding features with time like using Handy (libhandy) to make the application mobile ready. 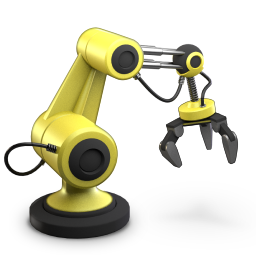 You won't be needing to install anything else. Every library that we might need like GTK, python-gobject, gobject-introspection, flatpak-builder, Meson are already shipped within Freedesktop/GNOME Runtime. We will be using the latest stable GNOME Runtime 3.32 which should be already installed on your system if you have installed Builder from Flathub (I do recommend you to do that instead of using the "normal" packaging formats). Otherwise, you can get that by typing in Terminal:

Let's fire up GNOME Builder and create a new project. Once Builder's main window is shown, you can see a "Start a new project" button

Once we have clicked on that, we get a list of different languages and projects types to choose from. We are going to select Python and GNOME Application as a template, we also need to choose a name for our project and an application ID. The Application ID should follow the reverse domain name standards, you can read more about that here on the GNOME Wiki

Before going through the list of files generated by Builder, we can check the result of what we have done so far by clicking on the run button or using CTRL + F5 shortcut.

Builder will use the Flatpak manifest generated automatically to build and run the application, you can see the build progress by clicking on "Build output" tab

Now that we are sure that everything runs correctly, let's take a look at the list of files that were generated by Builder.

What does interest us for now is the source code of the application, which is under src directory.

The UI of the main window

Now that we know where the widgets used in the main window are defined we can change those in order to fit our project. If we open the window.ui file in Builder, it opens the file in the design view, you can switch to the source view if you want to change the file manually.

Builder allow you to easily figure out which GTK Widgets are used in our UI file.

What we would like to do is to change the "Hello World" label to something else. The widget that fits our needs here is a ListBox which is basically a vertically oriented container that we can fill with any widget we want. You can right click on any widget and click on delete, so let's remove the label widget and add a GtkListBox instead. 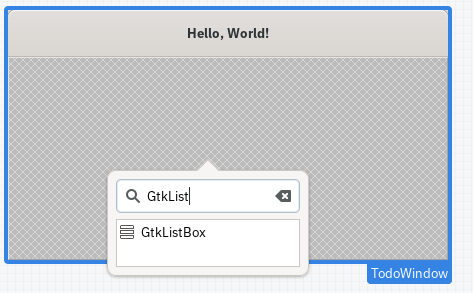 We can change the attributes of the selected widget from the right panel. The only thing we will be changing for now is the ID which is the identifier that will allow us to access and change the widget manually from our window.py file. 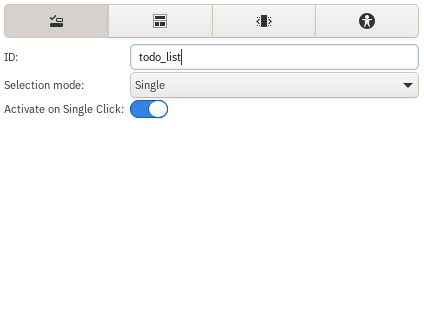 As we are using Gtk.Template which basically let you inherit a widget in your class while keeping the widgets, their attributes and how they should behave defined in the UI file.

If we look closely to the content of the window.py we can see that we are setting the Template resource_path using a Gtk.Template as a decorator. We need also to set a __gtype_name__ to define the name the composite widget we are going to use from the UI file.

For every child of our TodoWindow widget that we would like to have access to, all we need to do is to add a new property to our class, the name of the property must be the ID we have given to the widget and it should be a Gtk.Template.Child.

Let's add a bunch of random tasks manually to see how things look like. We are going to use a GtkLabel for now and update that later to use a widget that we are going to create ourselves.

When I started learning GTK a few years ago, you had to deal with installing the required dependencies, learn what' a build system and how to use one (we didn't even have Meson :/). Things got easier for newcomers, as you have seen on this first tutorial you can just start a new project and start hacking. Thank you, Builder, Flatpak, Meson, GTK and the maintainers of python-gobject for implementing GtkTemplate support. In the next tutorial, we will see how to create a widget that represents a task and how to store/read the tasks from a database. Till then here's a list of useful documentation to learn from: